In this post, I’ll show you how to make digital gates just out of transistors, as opposed to just using ready-made integrated circuits. We’ll make an AND, OR and NOT gate, and you can make other gates based on these. Knowing how to make digital gates is very useful in all kinds of applications, for example if you’d like to build a simple adding machine, or even an 8-bit computer! So, let’s get started.

Before we can make any gates out of transistors, you must first understand how a transistor works. Basically, transistors fall into these 2 main categories: NPN and PNP. I won’t go into the details about how they differ here, but you can read it here if you’d like. We’ll be using just the NPN version. 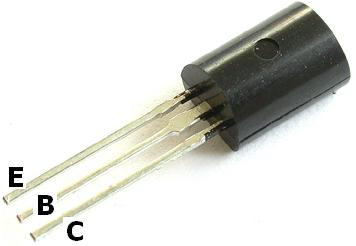 This property of transistors, that the voltage on base can control the current between collector and emitter, is very useful in all kinds of applications. For example, transistors are used as digital switches, where the voltage on the base represents the state of the switch (on/off), which is used in computers. They can also be used as amplifiers of current, where you can use a smaller current (between base and emitter) to control a larger one (between collector and emitter), which is used e.g. for controlling DC motors which require large current by using a smaller one provided from a microcontroller. In this tutorial, we’ll be using just the switch property of transistors, which is very useful for making digital gates. So, let’s go and make an AND gate!

First of all, what is an AND gate anyway? It’s a component with two inputs, say A and B, and one output,

. Each of those inputs is either a binary 0 or a binary 1 (i.e., true or false), which in practice means, that the voltage on the input pin is either close to 0V, or close to

, which in our case will be 5V (just how close it must be depends on the technology — TTL, CMOS, etc., but we won’t deal with any of those in this tutorial). The output of the AND gate will then be a binary 0 or 1 (i.e., close to 0V or 5V), depending on the values of its input pins. If, and only if both inputs are true, the output will be true, and in any other case the output will be false. This can be illustrated on what’s called a “truth table” showing every possible combination of inputs, and for each one showing the output of the gate:

You can see that this gate is called an AND gate because both A and B must be true in order for the output to be true, otherwise the output is false. This gate may be used in practice, e.g. for checking if both conditions are fulfilled before proceeding further.

But how do you make such a gate using transistors? Well, if you think about it, we can use 2 transistors in series to act like switches — if both of them are binary 0 (i.e., 0V), this means that each of them will have a (theoretically) infinite resistance, allowing no current to flow through them and thus making the output also binary 0. You can imagine it as a water pipe with two valves, A and B, with both of them closed — no water will flow through the pipe. Now, if one of them (either one) would be binary 0 and the other 1, it would mean that one would have a zero resistance, while the other would have an infinite resistance, again allowing no current to flow and making the output binary 0. Analogously, the water pipe has one of its valves opened and the other closed, still allowing no water to flow. Finally, if and only if both transistors had a binary 1 on their bases, each of the transistors would have a zero resistance, allowing the current to flow, and making the output binary 1 — it’s as if both valves of the water pipe were opened. And this is exactly the behavior we want, corresponding to the truth table above.

To make this gate in practice, I’ve drawn a schematic below of these 2 transistors connected in series (click on the image to enlarge). The first one, on the top, has its collector connected to

is connected after the 2 transistors, through a 1kΩ resistor to the ground. This LED will therefore light up only if both bases of the resistors are connected to +5V, which will be indicated by both LED A and LED B lighting up. Otherwise, this LED will not light up. To see it in action, you can skip to the documentation section and see the video. If you’d like to make other gates, continue reading. 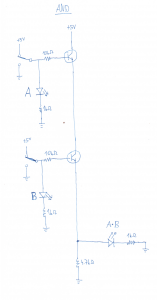 Now that we’ve made an AND gate, let’s make an OR gate. This will now be much easier since now you know the principles of how gates are made. The difference between an AND an an OR gate is summarized in the truth table of the OR gate shown below:

With that out of the way, let’s make the actual gate. Similar to the AND gate which utilized two transistors in series, an OR gate can be made by connecting 2 transistors in parallel. This will produce an OR gate, since just one of the bases of the transistors needs to be connected to +5V in order for the current to flow through it and through the LED marked A+B (i.e., A OR B), lighting it up, which indicates that the output is true. You can imagine this as two parallel water pipes which start from and end at a common pipe, with a valve on each one — to make the water flow, just one of the valves needs to be opened. Other than the fact that the transistors are positioned in parallel, and the output-indicating LED is renamed from

, there’s no difference between the schematic of an AND and an OR gate, with all the other components being positioned as before and having the same function as before. See the schematic below. 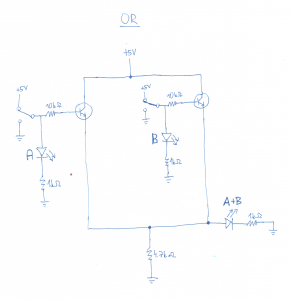 Lastly, we’ll make a NOT gate, aka inverter, which is actually much easier than the previous two. Basically, what it does is that it inverts the input value and displays it on the output. That is, if the input is true, the output will be false, and vice versa — see the truth table below. 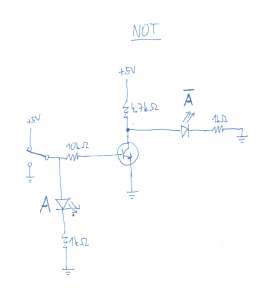 So, in this post, I showed you how to make 3 types of gates — AND, OR and NOT — and by connecting the output of one gate to the input of another gate, you can combine these gates to make all kinds of interesting circuits. For example, you can make a simple binary adder, about which I’d like to make a tutorial in the future. However, you might encounter some problems with voltage drops, where the output voltage of one gate isn’t high enough to be the input for the other gate, one solution to which is described on Electronics StackExchange.

So, I hope this post has been interesting to you, and if you want to see the gates in action, watch the video below. Also, if you have any questions or other feedback, feel free to post a comment. Thanks!